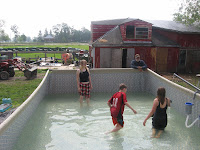 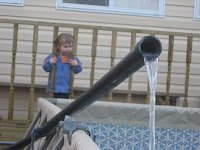 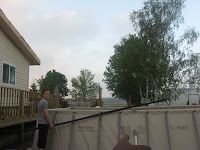 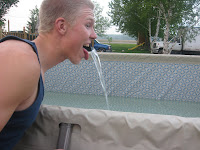 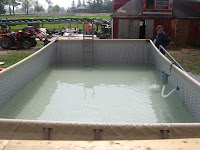 Well, after a false start (pool with a leak) and a few week waits for a replacement liner, we were ready to roll. Of course, we decided to change the orientation of the pool - short side to the house instead of the long side - so it wouldn't be such a squeeze, which meant more digging, tilling, leveling, rolling, cursing, stone picking, yelling etc., we finally got the thing laid out & ready to go.

One other thing I had to set up was the solar water heating array, on the roof, which meant having to pipe water up the side of the house and on to the roof. It was quite a chore even laying the panels on the roof. I had Dan go up with me to handle these things which are about 2 feet wide and 20 feet long. We laid the first one down and strapped it down. Then the wind decided to blow. I do not mean a breeze, I mean a BLOW. The sheet was whipping around like crazy and Dan and I both were dancing all over trying to settle it down - me in the middle and him on the other non-fastened down end. Okay. Where is everyone else, so's we can get this thing fastened! Nowhere to be found. After a period of loud screaming, we finally got Elena's attention (I think she was being nosy and had a peak at us because of nosiness, not for the purpose of helping.) We kinda made it plain that we needed her, Tiana & Critter up real pronto like, to act as ballast so we could continue fastening. Needless to say, it did get done, but not before many frequent wild rides as the wind continued to be boisterous - at least until we were finished when it died down to more manageable levels.

Any way, I decided that to check everything I would feed the hose into the "in" pipe of the solar array and thus fill the pool that way instead of putting the hose directly into the pool. Naturally the kids had a better idea. Since I wanted "warm water" to go in, the solution was to feed the big boys lots of liquids and just wait for a bit. My good wife had the camera, and took pictures for posterity.
Posted by yogrynch at 5:30 PM 2 comments:

yogrynch
Canada
The rants of a sometimes grumpy "old" man - although lovingly referred to by children and grand-children. Well liked (and licked) by dogs.